CBDT, SEBI sign MoUCST - Commissioner directed to unblock portal so as to enable petitioner to access and procure requisite statutory forms: HCCabinet approves affordable rental housing for urban poorCabinet okays Scheme of financing facility under 'Agri Infra Fund'Cabinet okays proposal to extend EPF contribution for another 3 monthsGovt allows reimbursement of cost of one pulse oximeter per family to ex-servicemenTrump Administration sends official letter to UN Secretary General for withdrawal of its membership from WHO on COVID-19 issue + WHO DG says peak of Coronavirus is yet to comeUS imposes visa curbs on Chinese officials from TibetPM wishes Brazilian President speed recovery from COVID-19 infectionWorks Contract and Medical Prosthetics under Taxation LawNo Merger of BoardsGovt working on Design for Single Regulator for print & digital mediaAssessee indulged in bogus transactions involving shares, despite knowing the illicit nature of such activities & also sought to legitimise illicit money under guise of exempt capital gains - additions framed on grounds of unexplained cash credit are sustained: ITATCBDT notifies National Pension Scheme Tier II Tax Saver SchemeCOVID-19 - Global tally swells to 1.2 Crore - 31 lakh in US; 16.75 lakh in Brazil; 7.44 lakh in India; 6.95 lakh in Russia and 3 lakh in Peru, Chile & Spain eachWhere assessee's accounts have been audited & balance sheet stands certified, then genuineness of creditors cannot be doubted: ITATFM asks 23 CPSEs to further raise CAPEX to aid economyGST - Hand Sanitisers - Misclassification - Alert issuedIncome surrendered by assessee in course of Survey proceedings is taxable as income falling u/s 68 to 69D, if no explanation is given for such amount - higher tax rate u/s 115BBE is applicable: ITATGovt to announce SoPs for resumption of film production: JavadekarSVLDRS - Where Form No 3 is not issued to applicant, then DA is obliged to issue discharge certificate within 30 days' time of filing the application - appeal disposed of as withdrawn under the Scheme: CESTATST - Penalty imposed u/s 78 of FA 1994 for non-payment of tax on Renting of Immovable Property Service, merits being set aside, if assessee was under bona fide belief of not being liable to pay duty but nonetheless deposits the same with interest: CESTATCOVID-19 - India has 315 recovery case vs 186 active cases per millionCX - Rule 4(5)(a) of CCR 2004 allows availment of credit even where processed goods are sent to job worker for further processing & which are established to have been received back in 180 days' time: CESTATFinCom discusses health financing with World BankCus - It is trite law that burden of classification of an imported item, is on the Department - Superior Kerosene Oil is correctly classifiable under CTH 2710 1990 where the Department is unable to prove otherwise: CESTAT 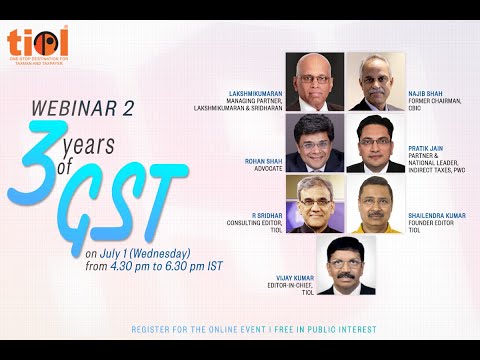 July 08, 2020 | TP
TP - It is fit case for remand where provision of warranty requires re-consideration after examining copy of provision for warranty and warranty expenses: ITAT
July 08, 2020 | TP
TP - Merely because prescribed Form No. 3CEB is filed in accordance with Rule 10E r.w.s. 92BA, it will not make taxpayer susceptible to onerous investigation on transactions where he prima facie demonstrates that Section 92BA is wholly inapplicable: ITAT

July 08, 2020 | Arbitration and Conciliation
Arbitration and Conciliation Act - Rliefs as prayed for in petition u/s 9 of Act cannot be allowed mechanically on its asking, as exercise of power by court is drastic and extraordinary: HC
July 08, 2020 | IBC
Trade Marks Act - Defendant company incorporated with consent and knowledge of plaintiff firm and no objection of any kind is ever raised can be held guilty of unauthorised use of mark LIBERTY if none of products of defendant Company, except shoes which are procured from LSL bear trade mark of plaintiff firm: HC